The Kupala Fairy Tale: Experience the Slavic traditions this June 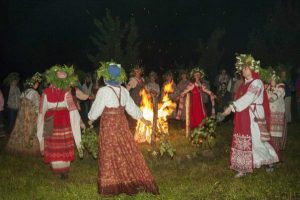 If you want to dive in deep into the revived Slavic customs and traditions, don’t miss the upcoming ethnic festival “The Kupala Fairy Tale” (Сказка на Купалу).  The Festival is timed to the ancient pagan fest of Ivan Kupala, or Ivan Day/ Yarila Day (June 24), one of the most important and sacred days in the ancient Eastern Slavic tradition timed to the summer solstice. The Kupala day was considered one of the most energetically powerful in the yearly cycle, and the night before the Kupala day was full of important rituals connected to the elements of fire and water, among the most well-known are jumping over fires, ritual bathing, collecting magic herbs.

The festival will bring together craftsmen, musicians, performers and masters of ancient traditions (herbalists, banya bathing experts etc.). You will enjoy ethnic live music (expected bands include “Ivan Kupala, Zhivitsa etc), attend in tens of different workshops (among them  workshops of the famous banya expert, Vasily Lyakhov),  and take part in the sacred rituals. And, of course, a large market fair with craftsmen from all over Russia will be at your disposal.