The 8th wonder of the world: the wooden palace of Tsar Alexei Mikhailovich in Kolomenskoye 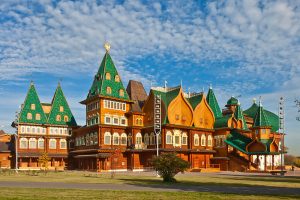 One of the most stunning medieval wonders, the Tsar Alexei Mikhailovich palace in Kolomenskoye, Moscow, was reconstructed a few years ago at its original location.  This magnificent work of art of the 17th century never ceased to cause awe and admiration of foreigners living in or visiting Moskovia (Moscow), and was “branded” as the eighth wonder of the world. It was extravagant both on the outside and the inside. Its scale and external décor was beyond impressive; its interiors were lavish and elaborate, all intended to demonstrate the Tsar’s power, influence, and opulence.

Here are some most unusual facts and highlights of the palace

Alas, at the end of the 18th century the Palace was demolished, with only the foundation surviving.  However, its descriptions survived in numerous documents, memoirs, paintings and drawings, measurement diagrams etc.  In 2010, a model of the Palace was constructed in the vacant area of the Kolomenskoye estate. Today, it is one of the most impressive living museums of medieval art and history. Its collection includes authentic interior artifacts, icons, wooden sculpture, furniture, household items etc.

I personally strongly recommend this highlight for those who wish to immerse into medieval Russia, and admire the specifically Russian grandeur of the Tsar estate, the Versaille a la rus. 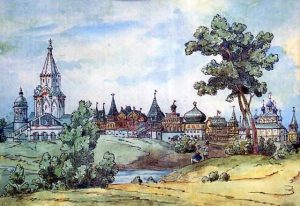 The Palace of Alexei Mikhailovich on an 18th century print

The Palace of Alexei Mikhailovich. Interiors