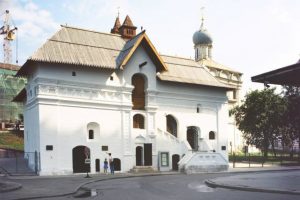 When we think about the Russian medieval architecture, the images that come up are,  of course, churches and monasteries.  The secular architecture does not immediately come to mind.  Indeed, there are not many secular buildings preseved from those times. You will certainly see their most impressive clusters in the Kremlin. But what about the rest of Moscow? They are not numerous, but they are still there, and they’re precious.

Over centuries, the Russians preferred wood for their houses, not only because it’s cheap and in abundance, but because it’s warm and cozy.  Stone buildings were a status thing, and only belonged to the boyars (the Russian medieval aristocracy),  kuptsi (the Russian merchants), and, of course, the Tsar. These houses were a pain to heat up during severe winters, and just like religious ceremonies were often conducted in wooden ‘winter’ churches in winter time (and in ‘summer’ stone churches during summer), so did the boyars and kuptsi preferred to move to their wooden houses in winter.

The stone chambers that we can still see in some parts of Moscow and other Russian cities are a joy to the eye. There is a word in Russian, ‘rukotvorniy’, meaning ‘made, created by hand’ , and that’s what these buildings are. They are usually small, two-three storey at most, and they cost a fortune to build.  They have small windows – glass was very expensive, and specular stone was often used instead. But their forms, their decor,  their imperfections are touching.

You can check out more photos of the Moscow boyar chambers (pictures taken at different times) at www.oldmos.ru/old/photo/tag/%D0%BF%D0%B0%D0%BB%D0%B0%D1%82%D1%8B 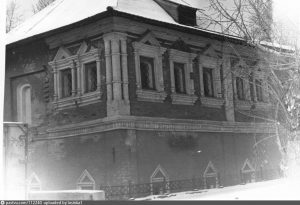