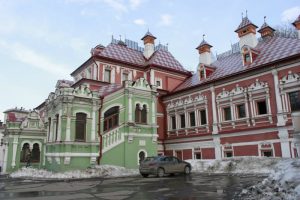 If you’ve always wanted to see the luxurious medieval palaces of the Russian aristocracy  but didn’t know where to look fo them, then  this is it!   I’m happy to share one of my most favorite highlights of medieval Moscow,  the Volkov-Yusopov Palace.  For some reason, it’s still not quite well-known even among the Muscovites. However, whereas the fancy Tsar chambers of the Kremlin are not easily accessible, this gorgeous house of the wealthy Usupov family has recently opened its doors to visitors.

The legend says there used to be a hunting house of Ivan the Terrible back in the 16th century where the palace now stands, a place where he rested after hunts as well as tortured prisoners. The legend also says there was once an underground network of tunnels that the Tsar secretly used  to appear in most unexpected places of Moscow.  The Palace was built in 1698, and in 1728 Peter the II granted the chambers to Grigori Usupov-Knyazhev.  The Usupov family’s wealth was  probably second only to the Tsar, and the  “Volkov chambers”, having become their main family estate were extravagantly decorated in a very oriental fashion.

The chambers are one of the only XVII century venues remaining that have preserved their original forms, layout and even parts of interiors including the ancient arched ceilings andglazed tile stoves.   The interiors are stunningly beautiful, if slightly too decorative.  Don’t miss the Chinese room with its priceless panel boards, elaborate wall ornaments and funny-looking elephants (apparently, the Russian painters had a vague idea of what elephants looked like). You will be blinded by the splendor of the Throne hall (or the Vaulted chamber), 170 sq.m. large with a ceiling decorated with zodiac signs, and other glamorous spaces.   You’ll be surprised to know that Alexander Pushkin spent her a few of his infant years together with his family who rented a part of the palace.

The palace was renovated at the end of the 19th century, funded by the Usupov family. It was then that the underground tunnel leading from the palace to the Kremlin was buried.

Usupov family kept the palace until 1917. It was nationalized in the Soviet times and served various purposes: it was a military history museum, a medieval history museum, and even an affiliate of the soviet agricultural academy.

In the post soviet times the palace was leased by a construction company which funded and carried out the reconstruction works. Today the venue can be rented for special occasions (weddings, anniversaries, corporate events), it is often used by the Moscow patriarchy. And, most importantly, we can all come visit it! 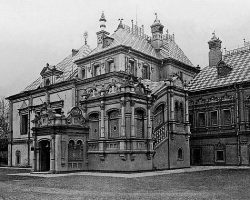 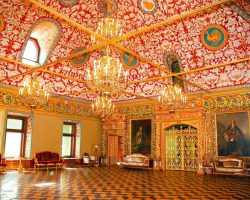 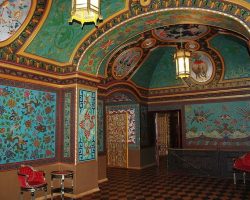 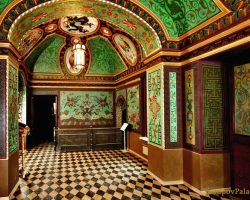 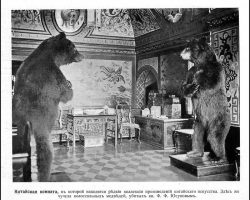 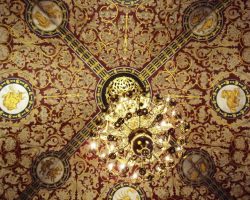 The Zodiac signs on the ceiling of the Throne hall 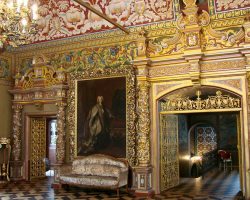 The interiors of the palace

The interiors of the palace