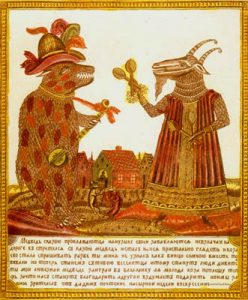 This is a lovely little museum in the historic center of Moscow which hosts a precious collection of Russian popular art prints  known as lubok that were extremely popular with the Russian folk before the  Soviet revolution. This unique folk art dates back to mid 16th century, when the first printed books came around.  The first lubok prints were religious in nature, printed by Vasili Koren’, a craftsman from Belorussia who created a series of prints called “The Bible for the poor” (in other words, for people who couldn’t read or write).  Thus, lubok essentially was a story in pictures.  Later, secular themes also followed, but the prints maintained its moral tone, though shifting more to humorous mockery of people’s sins and shortcomings. A lot of them depicted scenes from city and country life, illustrated proverbs and biblical parables, monthly calendars, curious events and happenings, and even political themes with funny and satirical comments. They were a kind of popular comics for simple people, and became extremely popular, serving educating, information, entertaining and even aesthetic purposes, as were a very cheap way to decorate one’s home.  The print cases were made of wood, printed on paper and then colored by hand.  Interestingly, the lubok craftsmen lived around the same area where the museum now stands (close to Pechatniki street, named after ‘pechatniki’ – printers) and very close to the former Sukharevski market on Sukarevskaya square, where prints were sold in abundance.

How to get there: Malyi Golovin pereulok, 10/9 Moscow. Metro station: Sukharevskaya 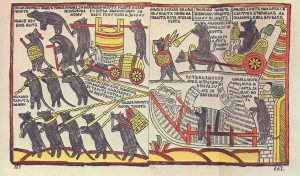 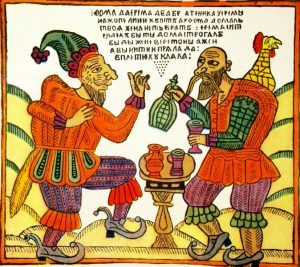