A Tribute to Craftsmanship: the Famous Kirillov’s House in Kunara 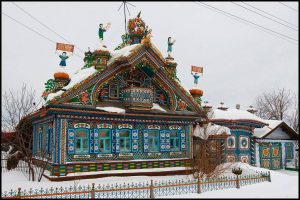 Everyone who first sees traditional Russian wooden houses with their fine, lacy carving of window cases, door frames and porches can’t help to admire their fairy-like appearance. Perhaps one of the most well-known houses in Russia is Kirillov’s house (Дом кузнеца Кириллова) in Kunara, a village near Yekaterinburg (Sverdlov region). The house was constructed in 1954-1967 by a local blacksmith, Sergey Kirillov, becoming his lifetime project. The elements of décor were inspired by traditional ornaments and Russian fairy tales, as well as Soviet propaganda symbols. Kirillov himself died in 2003, and the house is now looked after by his family, who also get help from volunteers. The house has gained such fame in Russia it is even mentioned in Wikipedia ( https://en.wikipedia.org/wiki/Kirillov%27s_house ) and in numerous blogs, including this English one https://outsider-environments.blogspot.ru/…/sergey-kirillov… .

So if you happen to be in the area, make sure you check out this unique landmark, a tribute to unparallel craftsmanship, dedication and love for homeland.