A Reconstructed Wooden Palace: The Tower-Chamber in Chukhloma, Kostroma region

This magnificent wooden palace was built in late 19th century by a local entrepreneur Sazonov for his second wife born in a nearby village.  The palace was designed by  Ivan Ropet whose design projects were a hit at the world architecture exhibition in Paris, 1887 (you can check out his beautiful projects at https://www.youtube.com/watch?v=4yiJ4xaWu_M ).  Ropet’s wooden projects in neo-Russian style brought him fame after prestigious exhibitions in Paris and Chicago, however, there are literally a handful of the actual buildings that he designed surviving today.  Among them – the Sazonov palace in Chukhloma.

This fantastic building was nationalized in 1917 and served as a library,  a ‘house of culture’, as well as housed local village administration. It was neglected in the 80s and began to deteriorate rapidly.  It was rediscovered in the 2000s. A  group of activists began  clearing it up  as it was choked with trees.

Later the house was acquired by Andrei Pavlichenkov, who funded its reconstruction.   He’s now working on the landscape design, building a guest house and is planning to open a museum.  The opening is scheduled for 2016.

Those of you who are adventurists at heart, here’s how you can get there:

Follow the M8 highway from Moscow to Yaroslavl’. Make a turn for Kostroma, then, once you’ve reached Kostroma, follow the signs for Galich (Галич).  When you reach Chukhloma (Чухлома),  follow the signs for Vvedenskoye (Введенское). You need to drive 25 km to Vvedenskoye, then make a right turn for Ilyinskoye (Ильинское) . Another 7 km to Ilyinskoye, then make a left turn (there will be a church). 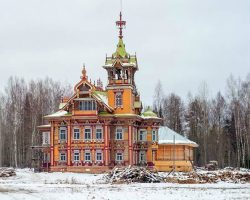 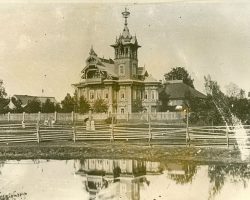 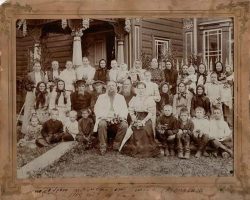 Sazonov, the first owner, with his wife and local villagers, 1908, next to his house 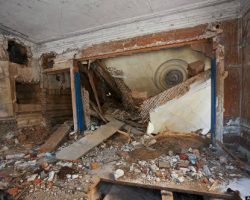 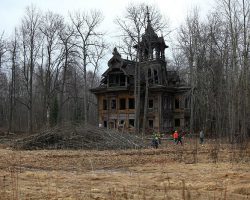 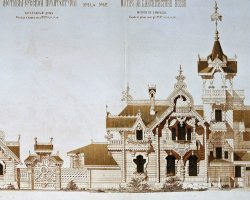 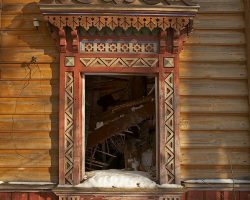 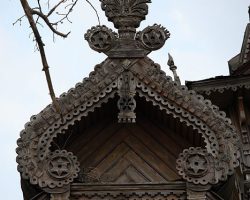 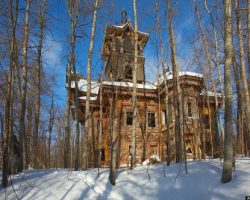