Discovering Plyos: The Obvious And The Subtle

A while ago I received an exciting offer to join a group of artists and spend a weekend in the picturesque little town of Plyos (Плёс) painting and exploring local art. Alas, I had to pull out at the last moment for personal reasons. Yet, because the intention had already been there, I resolved to find my own way to this far-out place on the Volga river, the one which was once greatly admired by (and is now strongly associated with) the great Russian landscape painter Isaak Levitan. 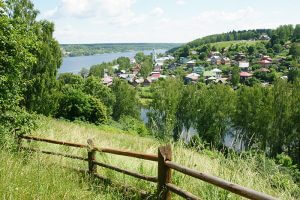 Plyos is one of those lucky few Russian towns that, despite their distance from the capital (some 400 km in Plyos’ case), are highly coveted among touristsand come across as fairly unscathed and well-groomed. It is particularly vibrant in summer, with its flocks of local and foreign tourists on weekends drawn by the unsurpassed beauty of its landscapes and its surprisingly rich cultural life including art shows and music events – like the annual open-air summer music festival which brings together local and international stars (this year’s guest-star was Robertino Loretti, who was immensely popular in the Soviet Union).  The town is also famous for its gastronomic delights, with its top specialité being the so-called ‘Ugli s kpchenim leschom’ (углы с копченым лещом), a kind of pastry with smoked bream – a much recommended treat.  It is also home to the famous French/Russian restaurant ‘Private Visit’, or (Частный Визит), set up by a French chef and run by himself and his Russian spouse.

The town stretches along the high bank of the Volga river and while the main street runs along the embankment, the back streets and sidewalks climb up the lovely hills: the walks around these hills with precious little houses and cozy gardens scattered around are a joy. Indeed, the landscapes are truly breath-taking and some of the most picturesque I have seen so far. 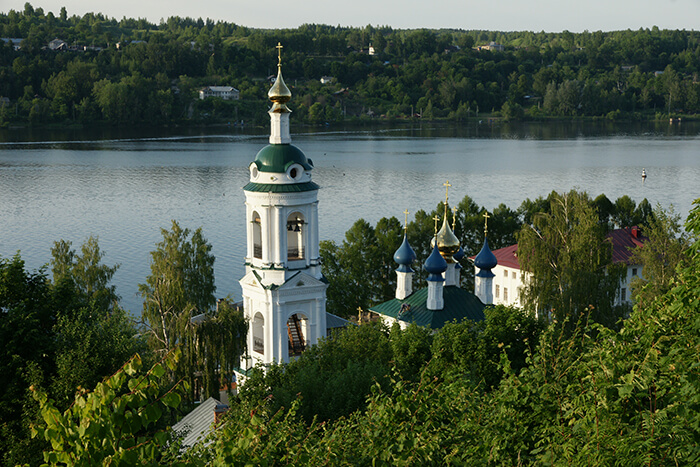 There is a saying in Russian about places whose architecture was greatly affected by the brutal and overly practical late Soviet style that ‘they were given a Soviet airing’. Luckily, this is not the case with Plyos, simply because it was too much of an unimportant province to be bothered with. It had its days of glory, though, when thanks to its advantageous position on the main transportation artery; the Volga river, and in between large trade centres, it served as an important hub for the region’s booming textile industry, and the local economy flourished.

After the introduction of the railway network, however, it lost its importance and deteriorated, becoming one of the many quiet provincial towns of this peripheral region. It was graced with a second wind when famous Russian landscape painter Issak Levitan ‘discovered’ it in the late 1880s. After he created some of his most famous works in Plyos, the town became a pilgrimage for artists and cultural intelligentsia. Today Plyos is home to several art museums, including the Levitan Memorial House hosting a collection of the artist’s works, and the Russian landscape Museum. There are several art spaces that hold regular art exhibitions, and local artists are happy to welcome tourists at their workshops. 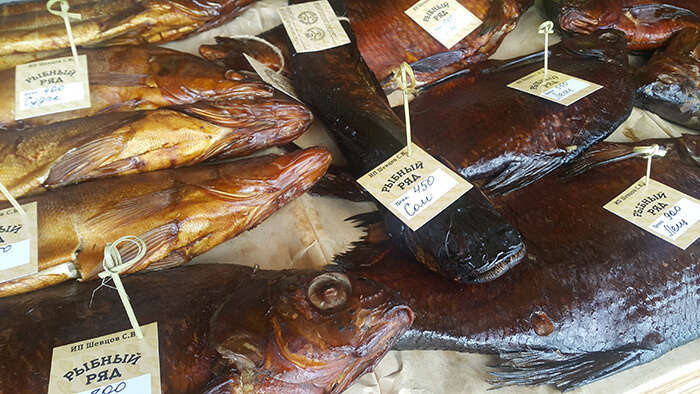 Plyos capitalises well on its association with Isaak Levitan and art in general: from Levitan Hill to Levitan cookies in local shops, they don’t let you forget the cultural significance of the town. Like in Suzdal, Kolomna and a few other famous ‘creative clusters’ there is a visible attempt to recreate the atmosphere (or at least a semblance) of a thriving merchant town of pre-revolutionary Russia, with shop signs written in old Russian and nicely remodelled architectural highlights. Indeed, a lot of local charm and identity was swept away after the Soviet revolution and so today attempts to revive and preserve what little has survived are welcome. 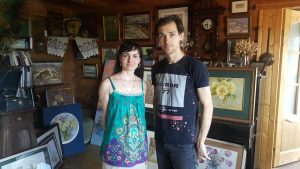 With Gleb ZhukovI was keen to meet local artists and hopefully visit a workshop or two. A personal recommendation of a friend brought us to the house of a local artist, Gleb Zhukov, whose works can be found in Plyos’s art galleries and have even travelled as a far as Moscow, France and Italy. His house and workshop, secluded in the depths of this seemingly small town, are a dream-come-true for any artist who seeks a quiet, cozy shelter: an old izbafull of antique furniture, a chimney piece in every room, and a beautiful, brightly lit workshop overlooking the hills. Gleb, a very pleasant and intelligent young man of about 30, was kind enough to spare two hours of his time to take as around the house, tell the story of his very artistically-inclined family, and show his art work. 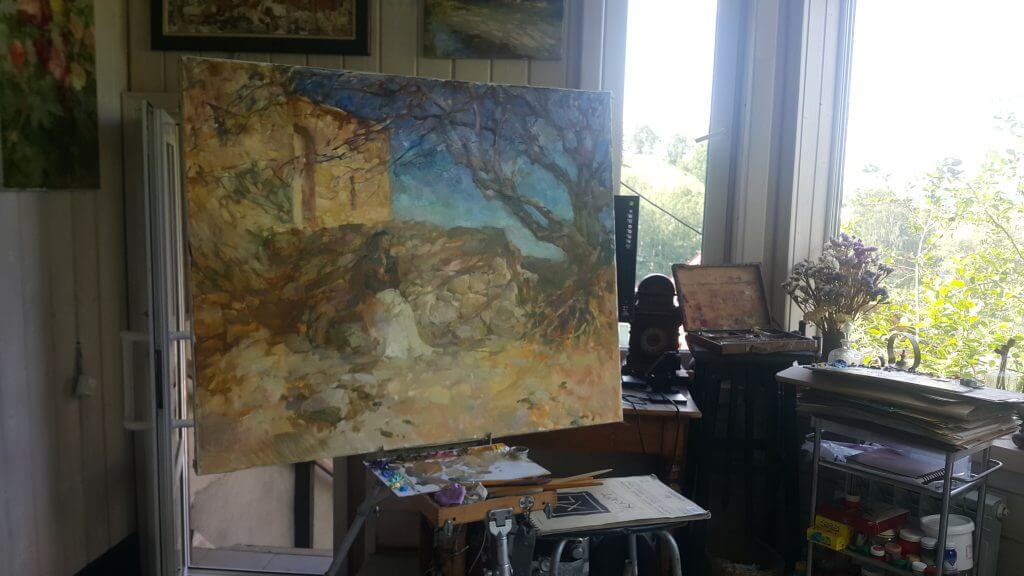 I am rather judgmental when it comes to art but I sincerely appreciated some of his pieces, in particular the one he was working on at that moment, depicting his friend at some ancient ruins in Georgia (see photo). Gleb holds regular art workshops in Plyos, Moscow and St. Petersburg, entertains visitors to his home and is a regular participant of art residencies in Paris and Florence. You can find out more about the artist and his work at www.zhukovgleb.org 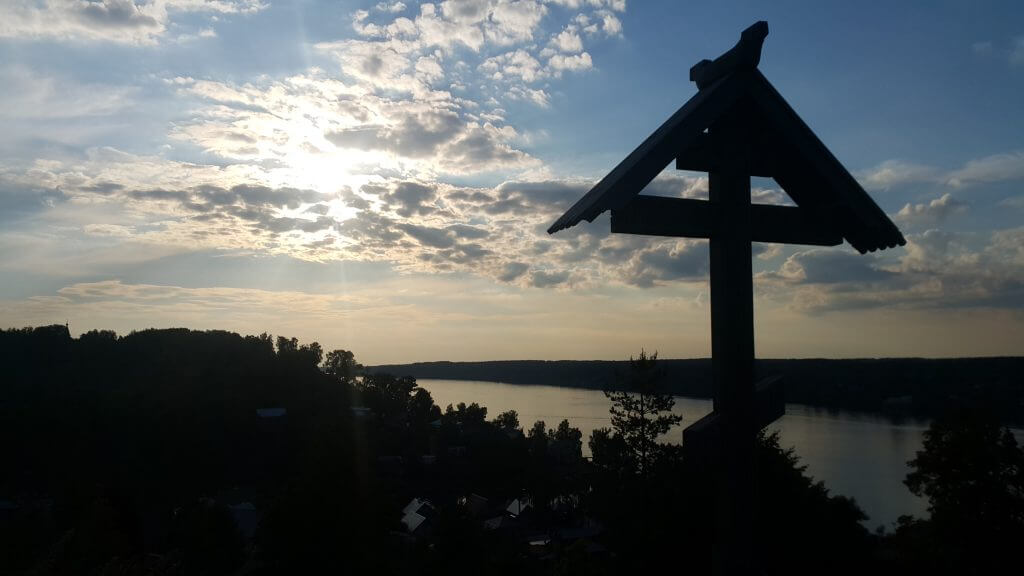 The evening view from Levitan Hill 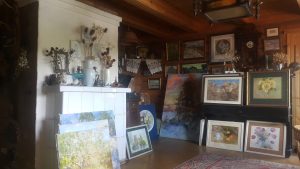 Spending time at Gleb’s very atmospheric house I couldn’t help thinking how many different ways there are to live one’s life. I also felt there was something more profound to be discovered in Plyos, something more elusive and subtle beyond the tourist attractions, souvenirs and gastronomic joys. This feeling persisted as I climbed up the Levitan hill later in the evening and was suddenly immersed in the magic of the sunset, as the warm light touched the wooden crosses at the old cemetery around the old church of the Resurrection of the Christ. There was not a stir in the air, and no other sound but the tender shriek of the swallows somewhere above, the river flowed solemnly beneath the hill – it was one of those precious and fleeting surreal moments that always stay with us. I wondered what it was about this place that, though tiny enough to be explored in a day (at least all its major tourist highlights), had something about it that probably couldn’t be understood after weeks and months of staying here. Certain things can only be appreciated if you take the time to stop and look and listen. I felt that something very important would evade me after I leave this place – the mystery of Levitan’s paintings, the magic of the ancient culture that once thrived here, the quietness and slow yet very deep course of life which was so palpable on the top of this hill, in the midst of the old graves and wooden crosses. I really don’t know. The moment passed and if there is ever another, it will be a different moment.