Our recent visit to this exotic chateau in Moscow region was a last-minute choice. Having decided to visit Kolomna for the long weekend, we soon realized all decent hotels in the town were fully booked for the May holidays and so had to look for something outside town. Something nice. Something quiet. Something different. That’s how we came across La Ferme de Reve.

The profile on booking.com looked attractive but it turned out to be so much more than a pretty picture! In effect, this is a grand castle á la francaise situated in the middle of the woods and fields on 50 hectares of land, and in its own eco-farm.

We spent two magical days exploring the castle and the farm and talking to the staff. Towards the end of the second day I was lucky enough to speak to the owner of this beauty, Igor Baulin, who happened to drop by his estate, and learn all the exciting facts from him directly. We sat in a beautiful room surrounded by 19th century French furniture and authentic watercolours and prints. Below is the summary of our conversation as well as my personal impressions. 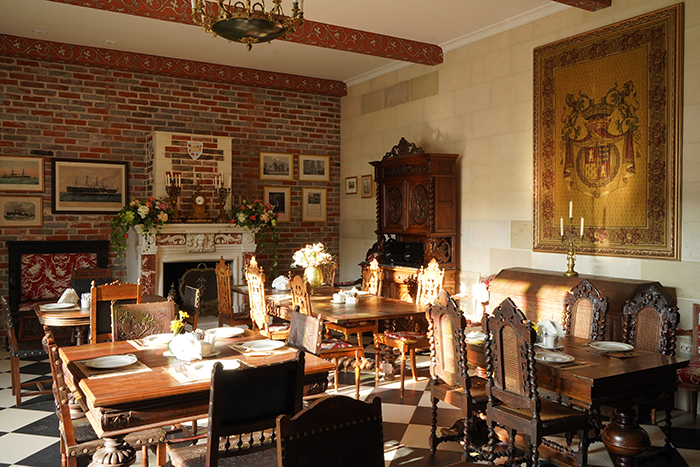 How it all began

This may have been the owner’s innocent joke, but he claims he once made a bet with his friend that he was going to build a real French chateau standing on a vast piece of land. He then chose the ‘prototype’ – Chaumont castle in Loire valley some 260 km from Paris. The castle is very old and once belonged to the Medici family. The farm and The Stables were set up in the 18th century.  The owner effectively made a replica of The Stables, which was a castle of its own (and one of the most modern and luxurious in the early 19th century). He literally measured it with a yardstick to produce the exact same copy! The original Stables consisted of a riding arena, horse stalls, as well as living chambers. Igor decided to turn his Russian version into a kind of auberge, a country hotel with its own eco-farm.

Most of the furniture inside the castle consists of antique European pieces which were acquired in Europe and brought into Russia as cultural valuables. All pieces are over 100 years old, and some date back to as early as the 18th century and are worth special attention, like the elegant drawer chest in the dining room or the two armchairs in Arabian style inlaid with mother-of-pearl. Most of the pieces were restored, the chairs and sofas upholstered. The stained glass is almost the same as the original back at Chaumont. I was particularly impressed with the two chimney pieces which, too, are antique and brought directly from France (see picture).  These are the interiors of most of the open spaces like the reception area, the dining room (restaurant), the lounge, the poolroom etc. The hotel suites vary from modestly elegant to spacious and extravagant.

I would say the interiors are done very tastefully, which, alas, is so often not the case with hotels.

The eco-farm fits nicely into the project and is truly breath-taking. Located on several hectares, it offers an abundance of both domestic and wild animals, from deer and wild boars to fancy chickens and peacocks. The place is clean and guest-friendly, with elements of landscape design. While the deer tend to be shy and stay away from visitors, the many sheep will always be grazing nearby, and geese and ducks will greet you enthusiastically as soon as you enter the farm. It’s happy time for kids (and some weird adults like myself (J), as lots of farm animals roam free on pastures that stretch for acres. Just before we arrived, a wild boar couple had given birth to many cute babies that were such a delight to watch!

I was particularly impressed with Siberian stags, or red deer – маралы – that were brought from Altai region to ‘colonize’ the lands of the castle. They seem to have gotten well accustomed to the new terrain and seem healthy and happy, producing many fawns each year.

A lot of the farm produce goes to the table of hotel’s guests, including dairy, free range organic chickens and turkey, and seasonal fruit and vegetables. You can get more exotic products on demand, like deer meat or wild boar fat/bacon – сало.

La ferme de Reve is a quiet place ideal for a romantic weekend or a family day. For us, it was more than a break from noisy and polluted Moscow city, it was a chance to explore a project which, for all I know, is one-of-a-kind in the Moscow region and has much to offer both on cultural and culinary fronts. As if simple pleasures of the auberge are not enough, the hotel offers a variety of beauty treatments like salt therapy and sauna, and horse-riding lessons. 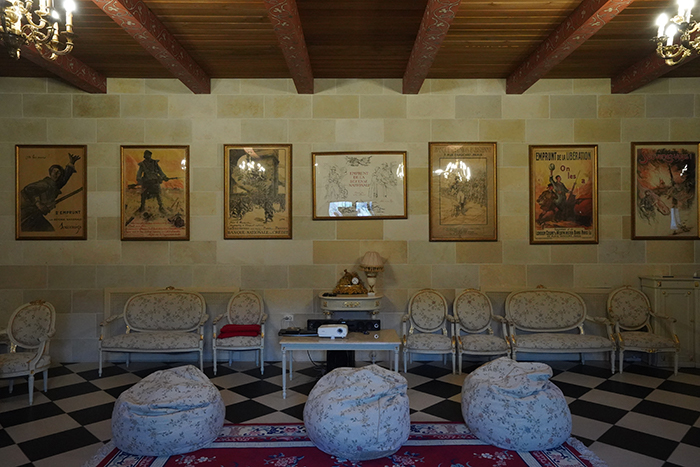 A highlight of the castle is a small museum dedicated to World War I. Among its items, a large collection of original French agitation posters is worth special attention (see picture). Most guests don’t realize the posters are authentic. Igor remembered a time when a group of French tourists were visiting the castle and were in shock to see these century-old French posters in a Russian province.

There’s always something to enjoy around the big holidays like Christmas, New Year or Maslenitsa, such as costume parties for children. The place is also a popular spot for wedding celebrations.

The chateau is not cheap to stay at, so most people who come here are middle- and upper-middle class Russians, as well as some very well-off people. There are many Muscovites who come to see the nearby Kolomna as well as enjoy the peace and quiet of the castle and its grounds. There are quite a few foreigners – Europeans, Americans and Chinese in particular.

The hotel management once received an offer from a particularly rich Russian family who were willing to rent the entire castle and its staff for the summer. In the end, the hotel management said no to this extravagant request, but rich clients coming here by helicopters are common.

According to Igor, the hotel project is financially lucrative, with economic indicators rising year by year. Besides standard hotel services, they often host special events like weddings and anniversaries, and rent out spaces for shooting of video clips and films. Igor claims they own the idea behind the project due to the fact that the it is absolutely unique and guests are attracted by its atmosphere.

Whereas, ultimately, you can’t suit all tastes and purses it makes me overjoyed to know there are enthusiasts who can make such projects come true in Russia and let everyone enjoy it the year round.